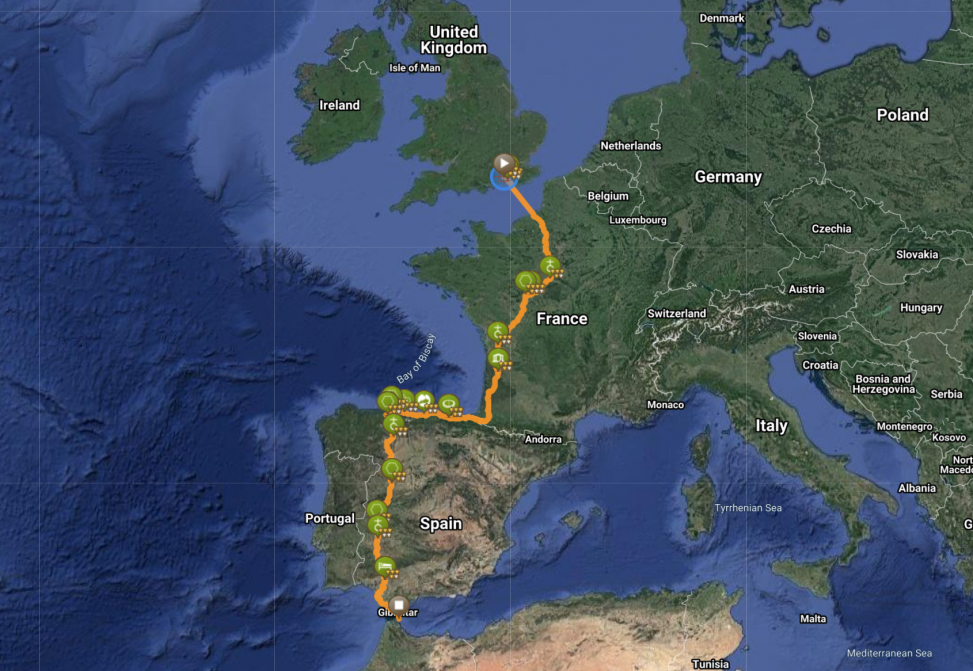 Yep. You read that right. In early September, amidst all the madness of 2020, I’ll be marching out my front door in sleepy, little Horsham and stumbling my way across the length of two entire countries on foot until I arrive in Northern Africa.

Those who know me well will be more than aware that wacky (and, more often than not, stupid) ideas are something of a forte of mine. This time, however, I think I may have just outdone myself.

I plan to be walking for around 100 days, trekking a total of over 2,000 miles mostly through France and Spain.

For those looking to gain a bit of perspective as to the challenge that lies ahead, imagine trying to walk across the road carrying your bedding, clothes, toiletries, food and water. Now imagine doing another 585,215 times with a few mountains in the middle and voila, you’re in Africa.

Exactly what route I’ll be taking is one of the many, many things that will be ironed out in the next few weeks. There’s a lot to plan as, well, it seems no one has ever been stupid enough to do this before. What I can tell you already with some degree of certainty is that Africa is quite far away.

Being that I’m not a particularly strong swimmer I’ll be forced to catch 2 ferries: one bringing me into mainland Europe and the other from the Southern Spanish peninsula into Morocco. The rest of the way will be made on 2 feet.

I’ll be doing the entire hike completely unaided, sleeping in a tent which will be carried on my back alongside all my other belongings. Showers will be a rarity and blisters will be an inevitability. Needless to say there are about a million things that could go wrong. Border closures. Getting lost. My dodgy knee giving in. Local lockdowns. Sickness. Lack of access to food and water. Bad weather in the Pyrenees. Fatigue. The list goes on.

In the run up to my departure in early September I’ll be posting more updates here so keep your eyes peeled.

You can follow my progress as I hike through weekly updates on this blog, internet access and phone battery permitting. In the meantime, feel free to contact me at if you have any questions.

Every year thousands of people risk their lives as they are forced to migrate to Europe. They do so mostly through treacherous sea crossings or by traversing heavily fortified land borders.

Whilst I’ll be making my trip by choice, these refugees are forced relocate to escape the war, persecution or poverty.

The UK is the start of my journey but an aspirational end point for a number of refugees. Of those heading to Britain, most will have family here or speak the language and believe that if they can arrive and seek asylum they will be able to work and live safely.

A great number find themselves held up at Calais, France.

In Calais most sleep rough without access to clean water, toilets or medical supplies. Their camps are routinely raided by local police, their tents destroyed and their sleeping bags confiscated. Crossing the border into the UK carries a high risk of death.

CLICK HERE TO DONATE. No amount is too small.

To arrive into Africa I’ll be making my way to the South peninsula of Spain and crossing over into Cueta, one of Spains 2 overseas territories in Morocco. These two enclaves, Cueta and Melilla form Europe’s only land borders with Africa.

For me, these fences will mark my arrival. For a number of African refugees seeking to obtain asylum in Europe, they mark one of the most dangerous and relentless parts of their journey.

These are some of the most fortified boarders in the world. Sub-Saharan African refugees regularly risk their lives trying to scale the fences here.

The borders are incredibly heavily barricaded: comprised of over 4 layers of fence, covered in barbed wire, angles, guarded on both sides and fitted with trenches. Refugees group nearby and try to make it over by storming the fence in numbers – sometimes a few make it.

Those who don’t get over are normally beaten by Moroccan forces, often on their feet and hands to make climbing again more difficult. The lucky few who do are often illegally deported back to Morocco before they are allowed to seek asylum.

CLICK HERE TO DONATE. No amount is too small.


You can learn more about the refugee crisis below:

Why don’t refugees stay in the first safe country? https://care4calais.org/the-refugee-crisis/why-dont-refugees-stay-in-the-first-safe-country/

‘‘We would rather die than stay there’: the refugees crossing from Morocco to Spain’ – https://www.theguardian.com/world/2017/aug/23/we-would-rather-die-than-stay-there-the-refugees-crossing-from-morocco-to-spain?utm_source=goabroad.com&utm_medium=referral&utm_campaign=article-feature

‘Are refugees illegal immigrants?’, ‘Why do refugees have smartphones?’, ‘Why do people become refugees?’ and more questions answered – https://care4calais.org/the-refugee-crisis/